I did my first Dirt Diggler event in 2016. To be honest, I mostly signed up for the name. I mean, how cool is that? It was my first gravel event (hindsight says that's not a great first event) and I ended up having all manner of problems before and during that race. For starters, I didn't have a Garmin, so I was going to use my phone as my Strava recorder. There's VERY limited cell service at REEB Ranch (and the surrounding areas, for that matter) so I wasn't able to record anything. And it didn't matter anyway, because right at the start of the race, the phone just shut down. Couldn't turn it back on until I got back and then it acted as if nothing happened. Weird. Not that it would have mattered all that much, I suppose, other than I have no record of doing the event other than my resulting time. About 5 miles in on Pinnacle Mountain Road, I got a flat tire, so I pulled off to the side and replaced the tube with the only spare I brought. How often are we gonna flat anyway, right?

So I quickly changed the tube, passed a few people again who I had passed just before I flatted when BOTH tires went flat. Yup. Three flats in about a mile. All on Pinnacle Mountain Road. I only had the one tube and I used one of the two CO2 cartridges. So, I just started walking. I mean, I had already used the only spare tube I had, and now that one was flat, too. So I'm walking along, and people asked if I needed help, I asked if they had spare tubes. One dude did, so I thanked him profusely and installed the tube, and then aired it up with the remaining CO2 cartridge. Well, mostly anyway, I lost the seal and drained the cartridge before it fully inflated. I still had a flat tire, though, so did it really matter? A couple minutes later, another dude stopped and donated a tube and he also had a frame pump, so I pumped it all up. As that was happening, the sweeper truck was driving by. I was so ready to just call it a day, so I threw my (borrowed from Charles @ Mock Orange Bikes) bike in the back and got in. We continued down the mountain and stopped to help another dude that was having problems. He wanted to finish, so we ended up riding the route home for a finishing time of just over 5 hours. Quite a day.

In 2017, I wanted to exact some revenge for the previous year and the goal time was under 3:30. On Pinnacle Mountain, I stopped to help a guy that had fallen and badly cut his forearm. My phone actually worked this year (and I had a Garmin) but I didn't have any service, so I rode up the mountain a little bit to call 911. That whole ordeal probably took 5-6 minutes or so, but we got him some help and I carried on. Finishing time was 3:38. Pretty close to the goal. I *might* have been able to finish under 3:30 had I not stopped, but not stopping wasn't an option. The dude was hurt pretty badly.

Fast forward to 2021. This is the third time to ride Dirt Diggler and the goal was still to ride a sub-3:30. This time, I wasn't going to take it easy at the beginning and save some for the finish. I was going to ride threshold for the whole time, trying not to get into the anaerobic zone. The ride starts right out of the gate with a field crossing, so there's some extra wattage being lost in the grass, and then you start climbing DuPont road, I think it is. At this point, I'm already glad to have swapped out the 11-34 for a 11-42 cassette with that 42T front ring. Anyway, heart rate was already where I wanted it for the day and I was able to pass a few people on that climb. Then came some gravel and I was able to pass a few more folks. Then came Pinnacle Mountain Road. That road is pretty gnarly, so I took it a little easier than I had in the past, but was still able to catch a group and hung with them for a while.

Then, around mile 12, the third bottle I had in my feed bag went missing. Probably shouldn't have cinched that top piece, but how likely was it that it was going to bounce completely out of that tube? Apparently the odds were better than I had anticipated. No more third bottle. It's hard enough to drink enough on some of those climbs, and especially on the descents, so I was probably not drinking enough of the Carbo Rocket mixture, and that's what caused some earlier-than-usual cramping at about an hour and 25 minutes into the ride. Cramps usually start for me around 3 hours, so I was optimistic that I could avoid them completely. Not the case, I suppose. Anyway, I was able to keep them from completely crippling me by stretching and drinking a bit more fluids. But with the missing bottle, I was going to have to stop at an aid station. Fortunately, there was one at mile 17 and mile 33. Mile 17 was too early in the ride and 33 was gonna work out pretty good, I thought.

After a pretty long, paved descent a group caught up with one another, I worked with a group of about 6-8 of us, setting a pace of around 24-25 pretty easily on the flat section before (??) Mountain Road. About 1 mile into that climb, I started dealing with cramps again and lost touch with that group but kept a reasonable pace.

I stopped at the rest stop, one of the aid-station workers topped off my one bottle with some Clif Hydration mix - thank you!. At this point, it was me and one other dude and I was yo-yoing off his wheel for about 30-45 minutes I guess, never feeling good enough to even attempt to get in front of him. At the aid station, he was apparently fueling with some mix he brought with him, and all I needed was some fluids, so I went on ahead. He ended up catching me about 5 miles from the finish, clearly the stronger rider.

The final climb is difficult to describe, but I have NO idea how it's possible to pave something so steep. I was able to ride the whole thing seated, though, thanks for the lower gear set I was running (other years required standing in the lowest gear I had). Then came the single track. It was a bit more technical than I remembered it being, and there was one time I thought I was going to go off the trail. Fortunately, I was able to not soil myself and toned down the remaining mile or so before the finish just so that I could finish in one piece. Final time was 3:12.53. I'm pretty damn happy with that result and don't feel like I have any business trying to beat that time in the future. My future self, though, may have different ideas. 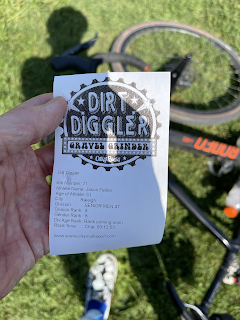 Blue Ridge Adventures puts on great events, and this was no different. Great ride. Great support. Well-run event. Highly recommended. Now, where's my celebratory beer? Or, maybe I could just go to Squatch Bikes & Brews and buy a Mondraker F-Podium Carbon DC and THEN have a celebratory beer. I liked that option better. Glad they had my size and the color scheme I loved! 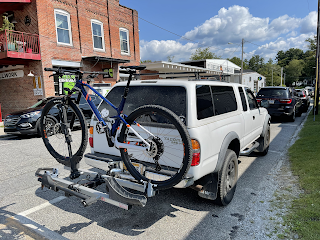 Sorry to make you worry about the "sketchy sections" of the race. But look on the bright side: your house is spotless. lol

Popular posts from this blog

A case of dumb

July 12, 2021
dumb \ ˈdəm 1 a : lacking intelligence : stupid     This past weekend my buddy somehow talked me into riding a gravel race of 71 miles with 7,000 feet of climbing on single speeds. Um, but the event did not have a single speed division. So we signed up for our age group. We normally ride a gear ratio of around 42x16 around Raleigh, so with that much climbing, we decided we would run a ratio of 42x19.   Now there's nothing smart about running single speeds. Regardless of how much time and energy and thinking you do with choosing a gear ratio for a ride, it's inevitable that the gear you pick is going to suck at some point along the ride. This ride was no different. At times, I wished I had a 42x15 and other times I wished I had a 42x42, especially on the Whetstone Mountain climb: a 1 mile ascent at an average gradie
3 comments
Read more

March 01, 2021
Today I am reminded of why I love cycling: being outdoors, enjoying the (finally) beautiful weather (it was around 70±5 degrees today) on the ~5 hour jaunt. I rode from near Crabtree Valley Mall through NC State campus, through Dorthea Dix, over to Walnut Creek Trail to Neuse River Trail and then down to near the Clayton parking lot. Total mileage 63 miles. That's enough for a 100k ride, or a Gran Fondo...at least as far as Strava is concerned...and that's part of the fun, too, right? To earn those badges. I wasn't going out for a fast ride. I was going out for a ride, regardless of speed; just ride what I feel while listening to Matthew McConaughey's Greenlights memoir audiobook. I am really enjoying listening to that. In fact, on this ride, Connie and I have decided that the hardcover version will be in our future library. It's been raining a lot here, so the trails were still a bit muddy in places. Surprisingly the tunnel under I40 on Walnut Creek was just simpl
Post a Comment
Read more